The EATCB 2019 organizes two networking activities to support academic dialogue: the Welcome Reception and the Conference Dinner. The evenings are set in a stimulating and relaxing environment in order to broaden networking opportunities. For logistical reasons, participants are requested to register for each social event during registration through our online management platform.

After the official opening of the EATCB 2019 the welcome reception will take place in the Stadsgehoorzaal, Leiden. The Welcome Reception provides an excellent opportunity to network, meet old friends and colleagues, as well as meet new people as the program begins. Small bites will be served during the event. 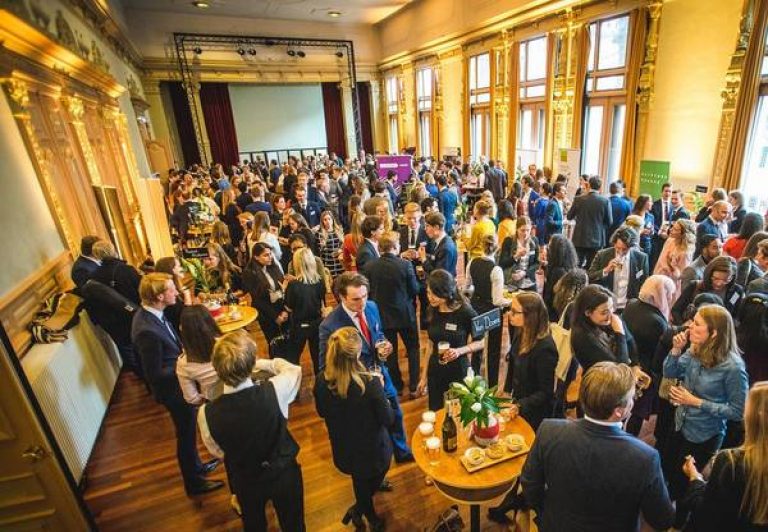 The Congress Dinner will take place in the Hooglandse Kerk, Leiden on Thursday 18 October.

Canal Tour
The congress dinner starts with a canal tour trough the Canals of Leiden, which will start at 19:00 hrs. We gather outside the conference location from where we will board the boats. Around 20:00 hrs we will arrive at the Hooglandse Kerk. We recommend bringing a jacket or a scarf during the canal tour.

Dress code
The dress code is business casual. The event will take place during the autumn and in will take place in a church, it might get chilly late at night.  We recommend bringing a jacket or scarf to the dinner.

The Hooglandse kerk stands on the ‘High Land’, part of the Waardeiland in the Rhine. Until the middle of the 14th century this area belonged to Leiderdorp, where the inhabitants also attended church. On this spot in 1314 they were given a wooden chapel of ease consecrated to St. Pancras. After the expansion of the city forty years later, this became Leiden’s second parish church. It was soon replaced by a stone building which grew in the 15th century to become the present imposing edifice, meant to reflect the thriving of the city.

The Hooglandse Kerk was never in fact finished. Around 1500 the wool industry began to decline and there was no more money. Moreover, the Catholic Church found itself in a crisis due to the Reformation. In 1535 all building activities stopped. Nearly a century later a wooden belfry was added to the tower. In 1572 the church passed into Protestant hands.